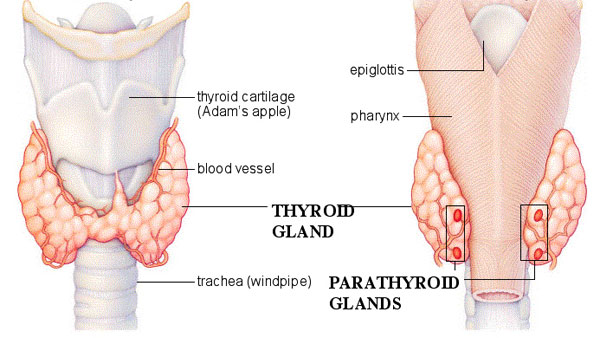 Parathyroid glands are known to control the level of calcium in our bodies, especially in bones and blood. These small glands are an integral part of the endocrine system located behind the thyroid in the neck region. There are four of them in every individual, and their sizes range from that of the common rice grain to that of a pea.

Significance of Calcium in the Human Body

Calcium is an essential element of our bodily functions. It is primarily involved in the following:

Electrical Energy – It provides electrical energy to the nervous system to create impulses. Likewise, it generates electricity in muscle cells to provide energy for contraction and other movements.

Strength – It provides strength to the skeletal system by making the bones stronger. In fact, the bones serve as a depository of calcium which is used to maintain an adequate level of the element in the blood.

The fundamental purpose of parathyroid glands is to regulate the calcium levels in our body so the dependent systems can work properly. They maintain an equilibrium in the nervous and muscular system by measuring the element level routinely. A dip in the level triggers the production/secretion of parathyroid hormone (PTH) in the gland. This hormone takes out calcium from the depository (i.e. bones) and puts in the blood to overcome the shortage. Once the desired level is attained, the glands stop producing the hormone.

This the most common disease associated with the gland. It refers to the state of over-activity of one or more of the glands which results in an excessive secretion of the PTH, thus causing a severe imbalance of calcium levels in the blood. It increases the level beyond the conventional norms.

Due to the excess of parathyroid hormone, the bones keep releasing calcium into the blood. A constant repetition will drain out the element from the bones, thereby making them weak and brittle. This condition is also referred to as osteopenia or osteoporosis which represents the development of more pores/holes in the bone and less mass. The weakened bones are more prone to fractures and other sorts of damages.

Cause – The major reason behind the excess production of PTH is the development of benign tumor in one of the parathyroid glands. Though it is not cancerous, it heavily devastates the body by over production of PTH and thus increasing the calcium levels.

Cure – The effective cure is supposedly the removal of the tumor because high calcium can be more lethal than high cholesterol.

PTH can be measured just like calcium and hence the conditional anomalies can be identified. On the contrary to the above discussion, there is another condition called hypoparathyroidism which has effects opposite to that of hyperparathyroidism. It is a rare occurrence and may show up only when all the glands are removed.